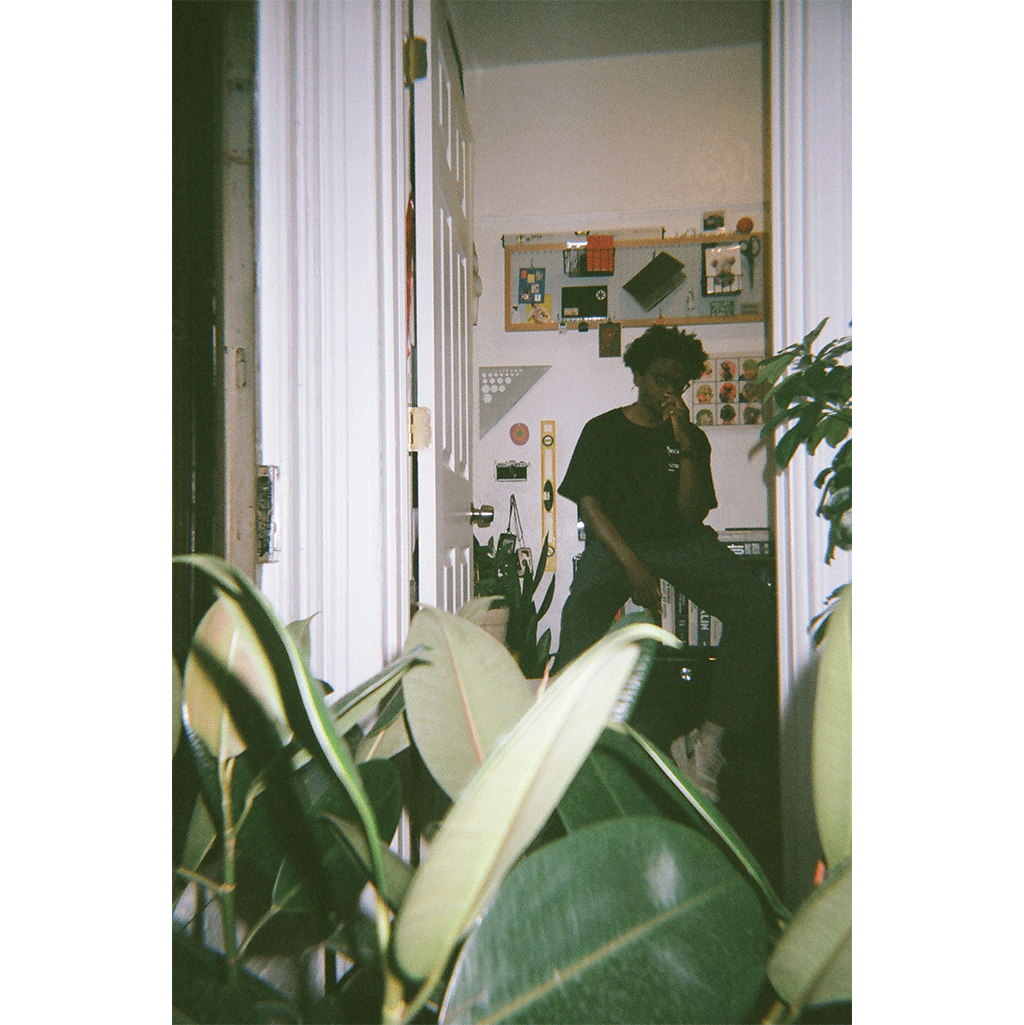 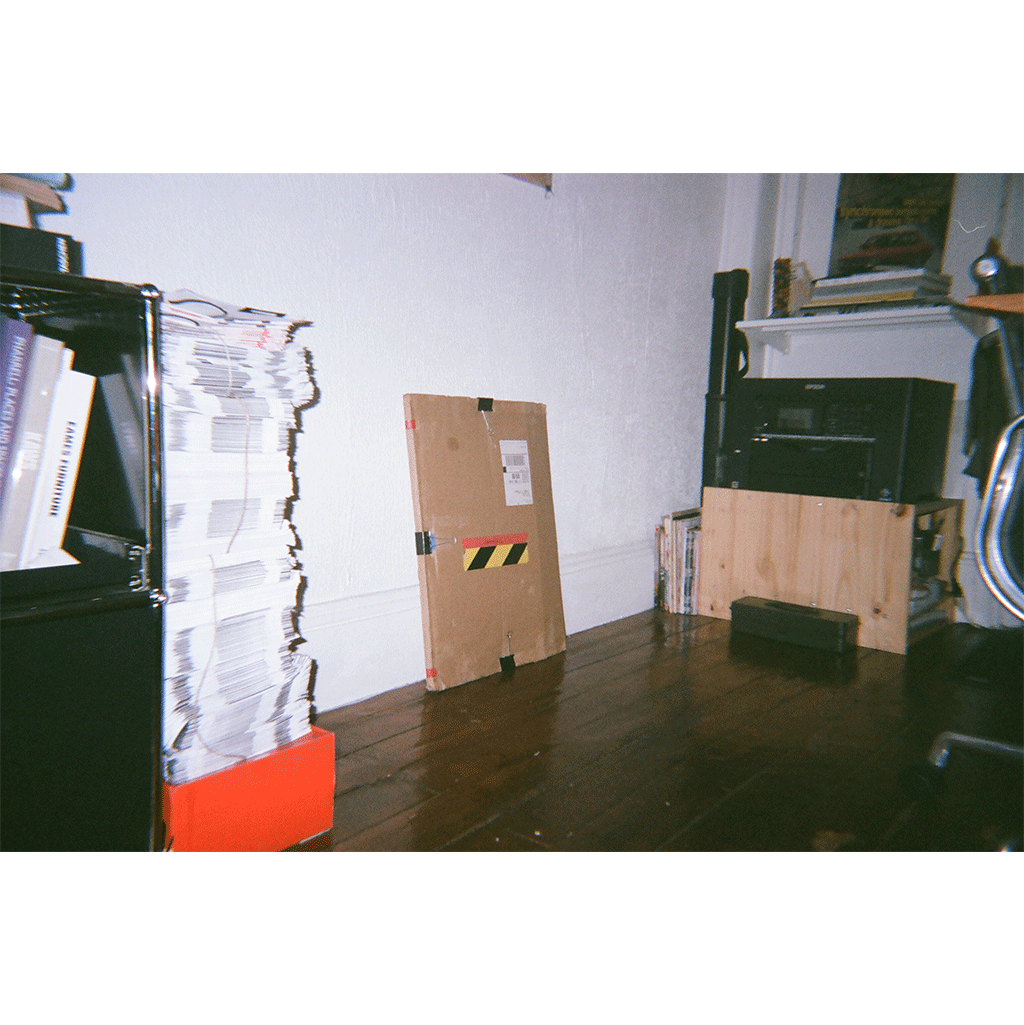 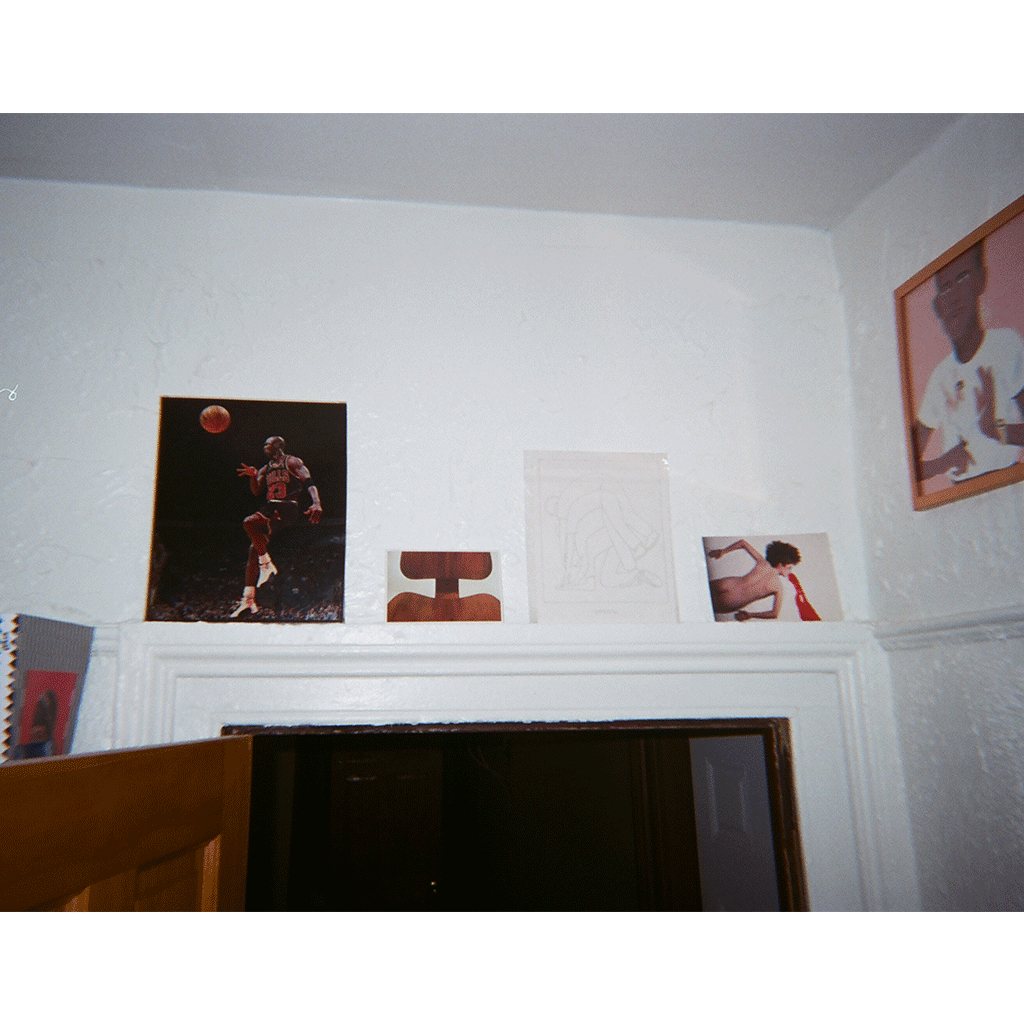 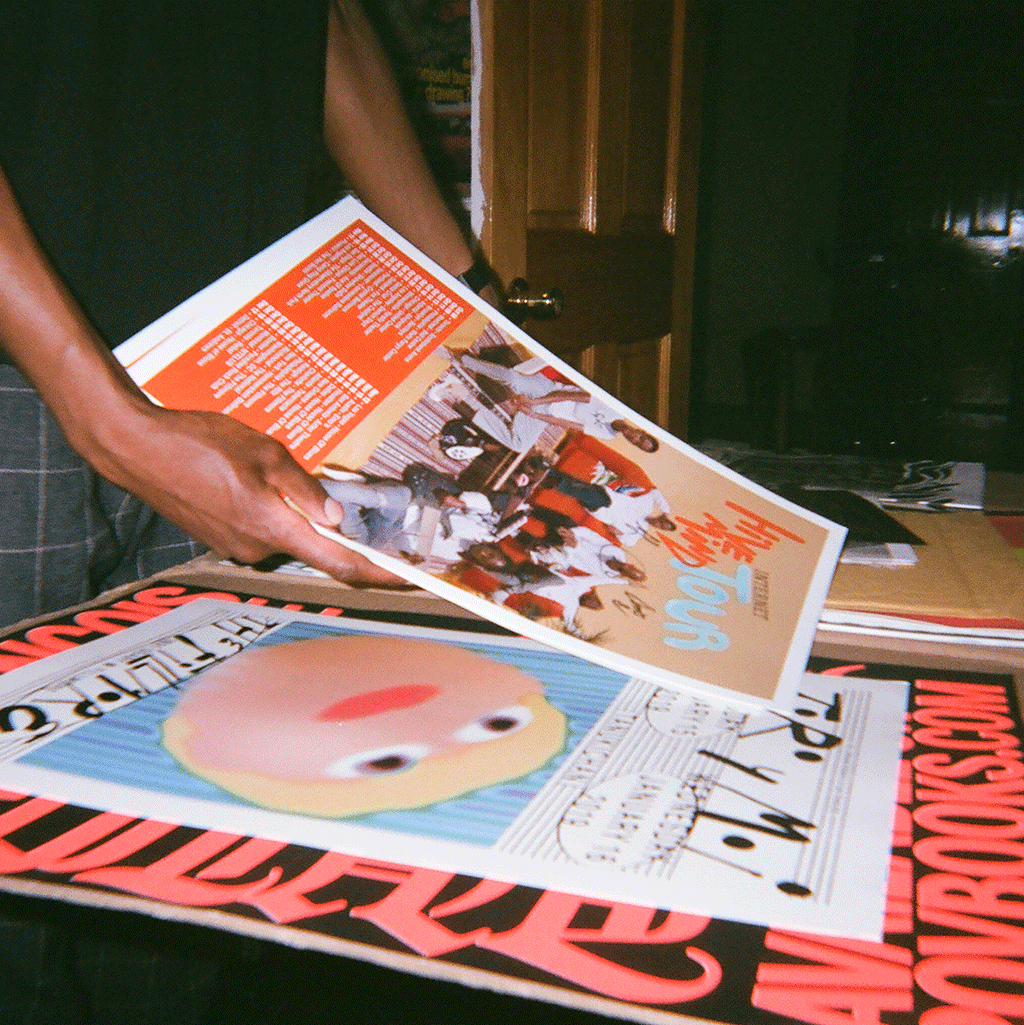 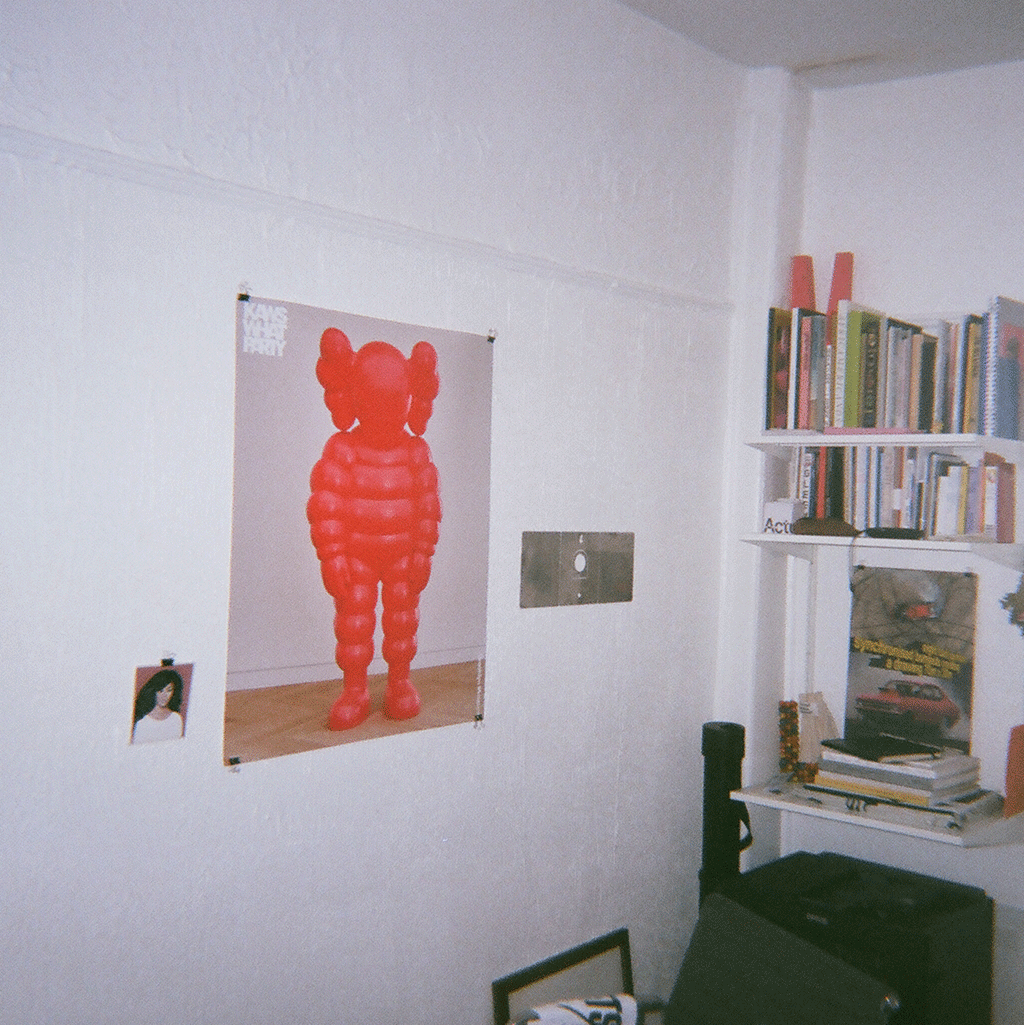 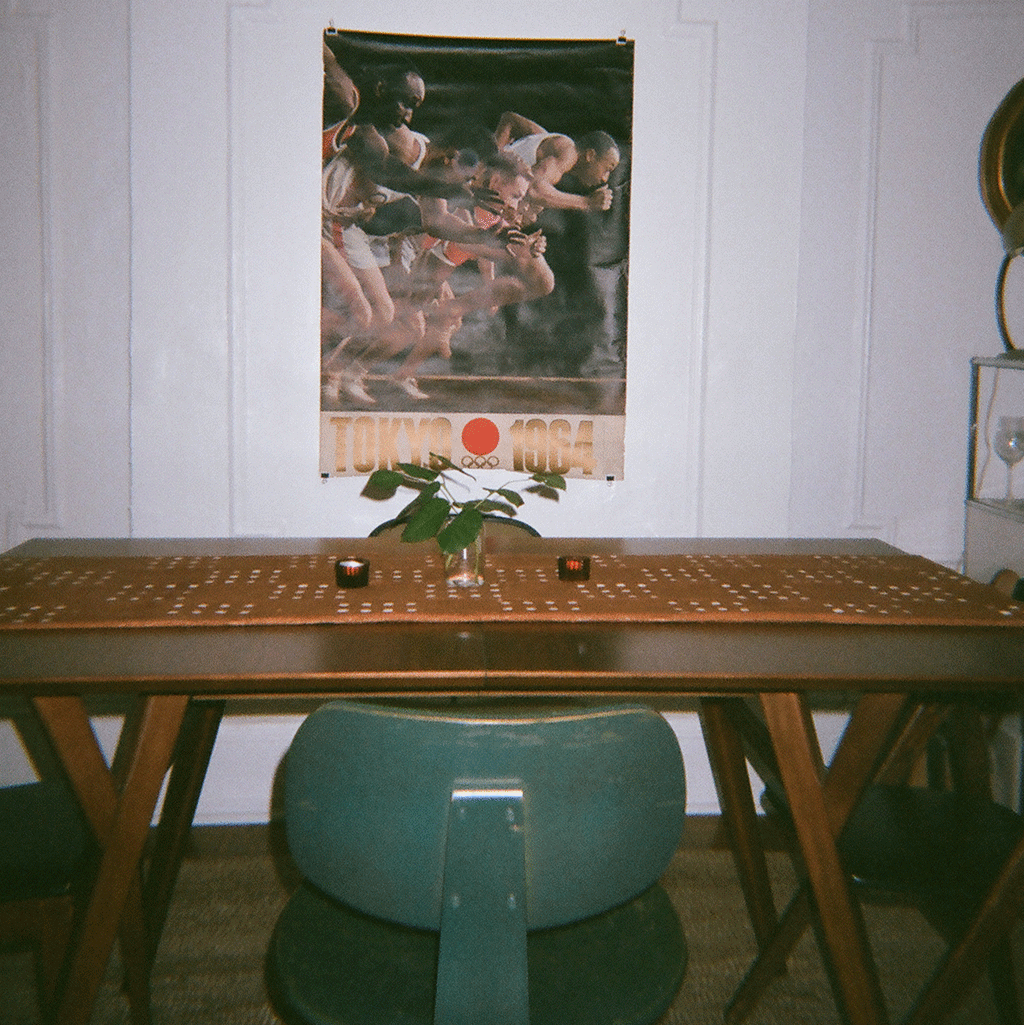 Occasionally you encounter someone that really loves what they do and where they are. When this happens you can’t help but glean a refreshing burst of inspiration and Authenticity from them. We are so happy to have crossed paths with Renald. Renald is a brilliant Brooklyn-based designer/ illustrator that is a unique blend of creator, collector, and visual artist. He’s one of those rare people that didn’t discover what he loved, it discovered him and he’s genuinely in love with print. Originally from a small South Shore suburb of Boston (Randolph Massachusetts), Renald was drawn to illustration + graphic design at a very early age. Often, experimenting with photoshop making content for myspace in his early days.

His work visually explores personal tensions juxtaposed against larger and more ubiquitous cultural issues. Renald converges the traditional skills required for both design and illustration into a hybrid medium complete with brilliant use of space, stark color, and the object-like presentation of type. Most recently, a Brand Designer at MEDIUM, who’s principal in the branding and overall look + feel of the platform. Somehow, balances a healthy flow of freelance work developing brand Identities, bookmaking, print & editorial work for a variety of select clients.

THE OBJECT: Self Made Upcycled Flat File

It’s been with Renald since the college years. An eclectic mix of personal work and his most prized print pieces. In some ways It’s a visual journal of Renalds life and there’s no shortage of remarkable works inside. A temporary home for old illustrations, the work of friends, inspiring professors, magazine print clippings, and meaningful works that evoke his fondest memories, before they find a place on his walls. If you are keen on graphic design/ illustration and fond of printed works the Renlad’s collection is pure Gold, there are some true gems, the right balance of raw minimalist compositions, and nostalgic aesthetics from the peak of retro-print design. It’s was amazing to take it all in and definitely wishing you all could have been in on the Zoom interview.

RENALD
It’s where I keep all of my printed stuff. My work and the most meaningful things. Every item is a memory, super rare or an inspiration I can’t part with. The flat file came about as a byproduct of a print-making class at Uconn. It’s first life, was to preserve the very expensive paper for that project during shipping. I Upcycled the box it came in added a few large binder clips and that’s what it’s been ever since. To have a piece of cardboard for six years is kind of crazy. It’s pretty inconspicuous and unassuming but it’s everything. If my apartment was burning down and I needed to run out to survive, It’d be the first thing I’d grab. How can I put this………… “There are pieces of paper in this world that mean a lot more to me than some people".....If that makes any sense. Especially, as I get a little older and can afford more rare things, It’s becoming more important to have things that mean a lot to me on my walls.

This is where they are preserved until they make it there. They don’t all have to be expensive but they all have value. I can go on and on and I haven’t even shown you everything in here. It’s the random and rare ones that I really can’t let go of and I do have a few fav’s - Hard to find Geoff Mcfetridge Illustrations from printed pages magazine and a few from one of my favorite illustrators Andres Samuelson - I can’t wait to get on my walls.

RENALD
When I’m gifted prints It means so much more, it’s really like the best gift I can get. Print is attached to all my meaningful coming of age moments.

When I first moved to New York, in East Williamsburg my apartment was two doors down from the Spoonbill Bookstore’s second location. Spoonbill was like my introduction to New York. I was fresh out of undergrad and living in this dope apartment right next to this amazing book store. “I was living the dream.” I have a Comme des Garçons’ Ad. Clipped from a magazine that was the last thing I got before they closed down.

I seek this stuff out. I’m most interested in classic stuff with a ton of History, that’s hard to find, and won’t be found anywhere else. I was on eBay for weeks to get an Olympic poster. I found a seller in Japan that had exactly what I was looking for the 1964 Tokyo Olympic poster designed by Yusaku Kamekura. Amazingly Iconic, amongst all of the Iconic Olympic posters that are already a thing in Graphic Design. I want to own pieces of History, that represented moments that had a profound impact on the world.

“Paper is a beautiful thing, paper is great - END OF QUOTE .”

Tell us about a time it was hard to be yourself.
Finding yourself in N.Y.

RENALD
It’s a challenge to be yourself in New York and over time the journey to do so makes you ask, “Am I still being myself.” I can be sponge at times and there are so many inspiring people and things in New York. In High-school....... there was a variety of influences, 106 and park, complex and hype beast all had an impression. I balanced those inspirations with the ability to adapt to pressures to conform to all-white Catholic school trends, down to sporting the Sperry Top-Siders.

I struggled with the conflict of my own interests vs. the peoples’ around me. Ultimately, I do think people in my past expected me to be who I am now, but I never anticipated being able to express my full self before I moved here.

When you’re around people it’s infectious. You drink the kool-aid, you get inspired and you change over time. It’s actually why I love NY, there’s no one specific way of anything. Being myself really meant finding my people. Surrounding myself with creatives, not only creatives but creative people that look and talk like me. It’s been the best thing for me. I still want my own identity and not homogenized. I can say I have become everything my 14yo self would have dreamed of and I don’t know what’s next. There’s a lot of identity stuff tied up in that…..I’m 26 and what will 30 look like, what do I want it to look like…all that said, fully being myself will come together when I figure out what’s next.

WHAT’S SOMETHING PEOPLE DON’T KNOW ABOUT RENALD, THAT YOU’D WANT EVERYONE TO HEAR?

I HAVEN'T CHANGED MY DESKTOP BACKGROUND IN 8 YEARS
It’s Michael Jordan floating towards the rim on a blue backdrop. It’s perfect and the only one I think I’ll ever need. I really put myself out there and I’m challenged by some insecurities. I mean, we all are. When I share pictures of my self I did have a concern that I may come off looking pissed off. I used to make a point of trying not to because I didn’t want the stigma of a black person that is always walking around pissed off. I’ve since gotten over that and have come to terms with the fact that I have a lot to be upset about as a black man in this country. But learning how to channel that frustration without compromising my actual feelings has helped me a lot. A lot of what I do in my work investigates my insecurities and I like to explore them visually.

Special as an Ideal.

RENALD
This may be an even more unexpected answer to that question, but I’ve been really struggling with design lately. It’s felt less special,  the saturation is so deep…………everything is “design,” today. I guess that’s ok because at its roots it wasn’t intended to be uber-specialized. It was a provided service everyone could afford and benefit from. We are all exposed to the same things now, and instantly. So it’s increasingly hard to be rare or original. I don’t know if I’m basic or not - also, I don’t know if being basic is a bad thing. There’s definitely pressure as a designer to be really special with unexpected interests and I have to admit trying to appease the expectations in the design (creative) community can easily lead a designer to burn out.

ABOUT Renald (b.1995)is a Brooklyn-based designer and illustrator. His illustration focuses on introspection and self and is expressed through light, minimalist touch. In contrast, his design work is lush and detailed, carefully researched, and composed with typography.
More info: renaldl.com 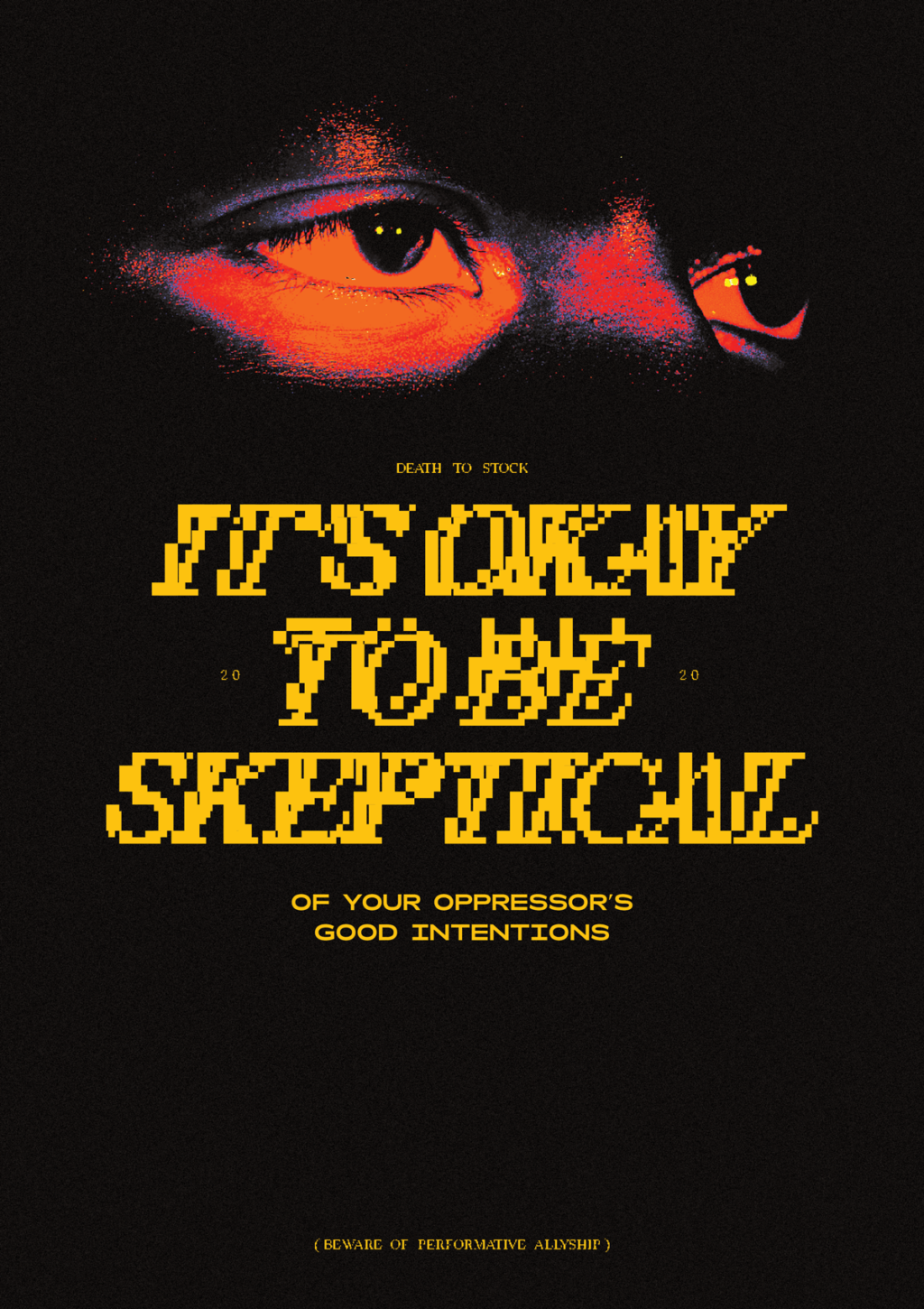 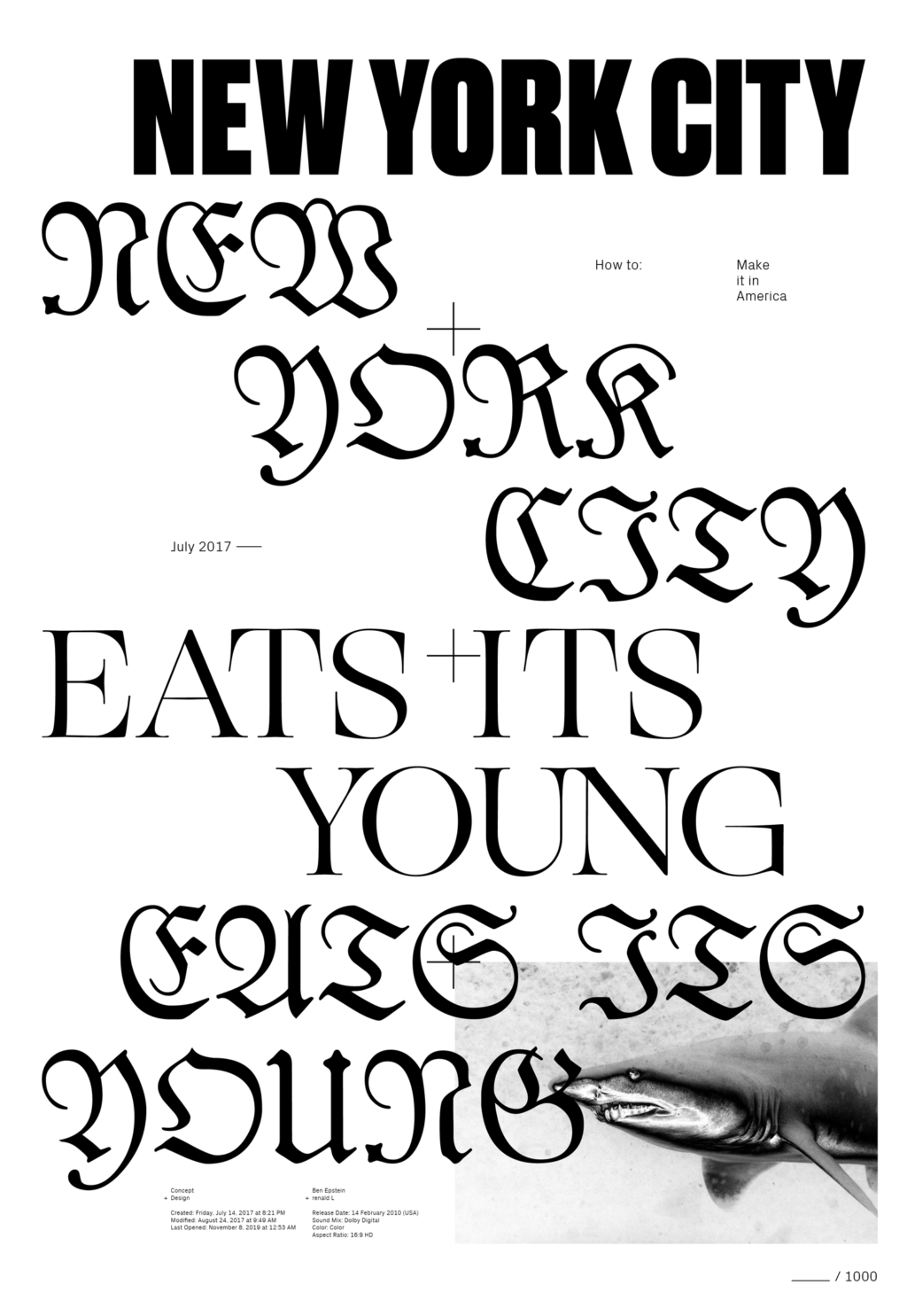 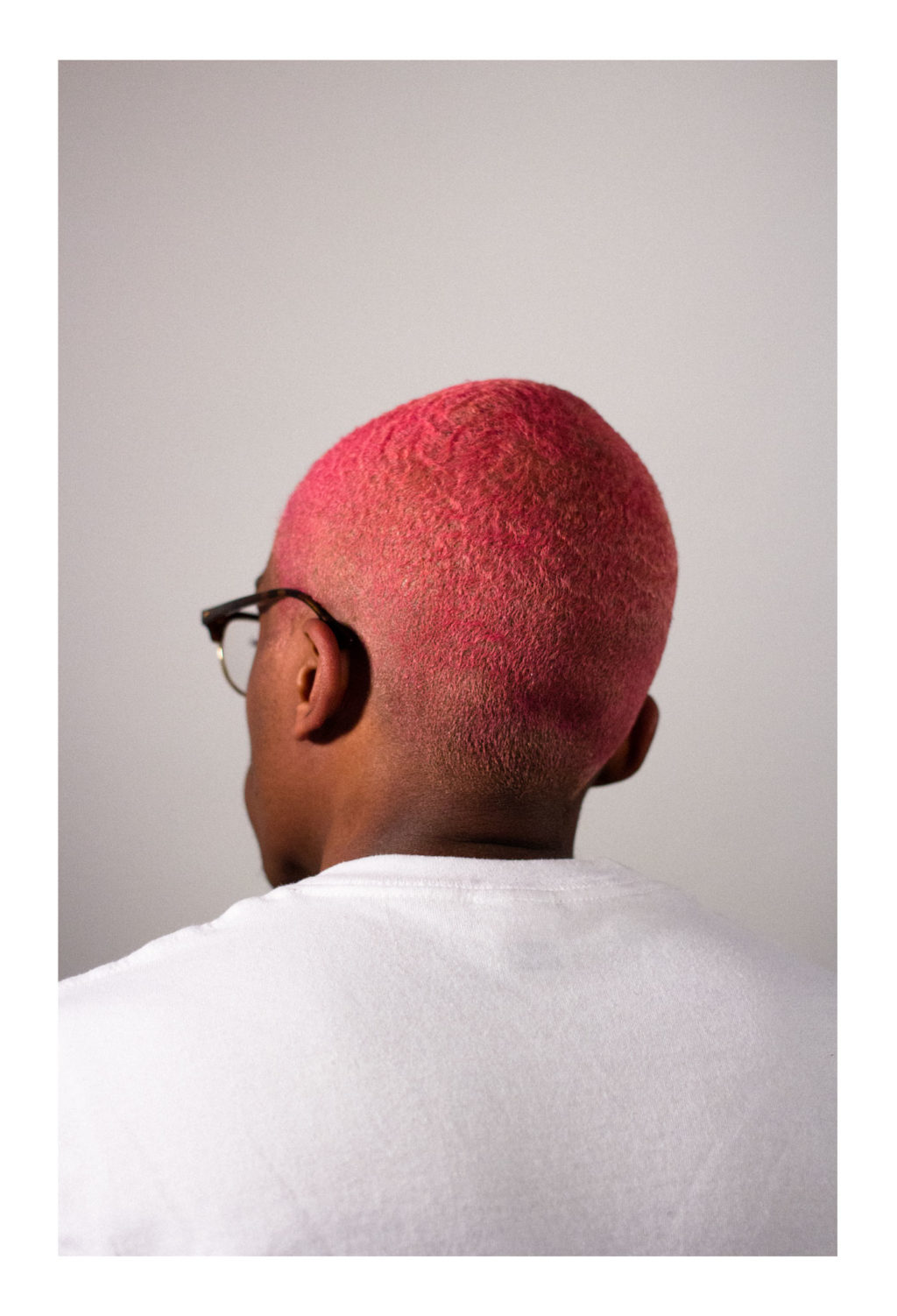 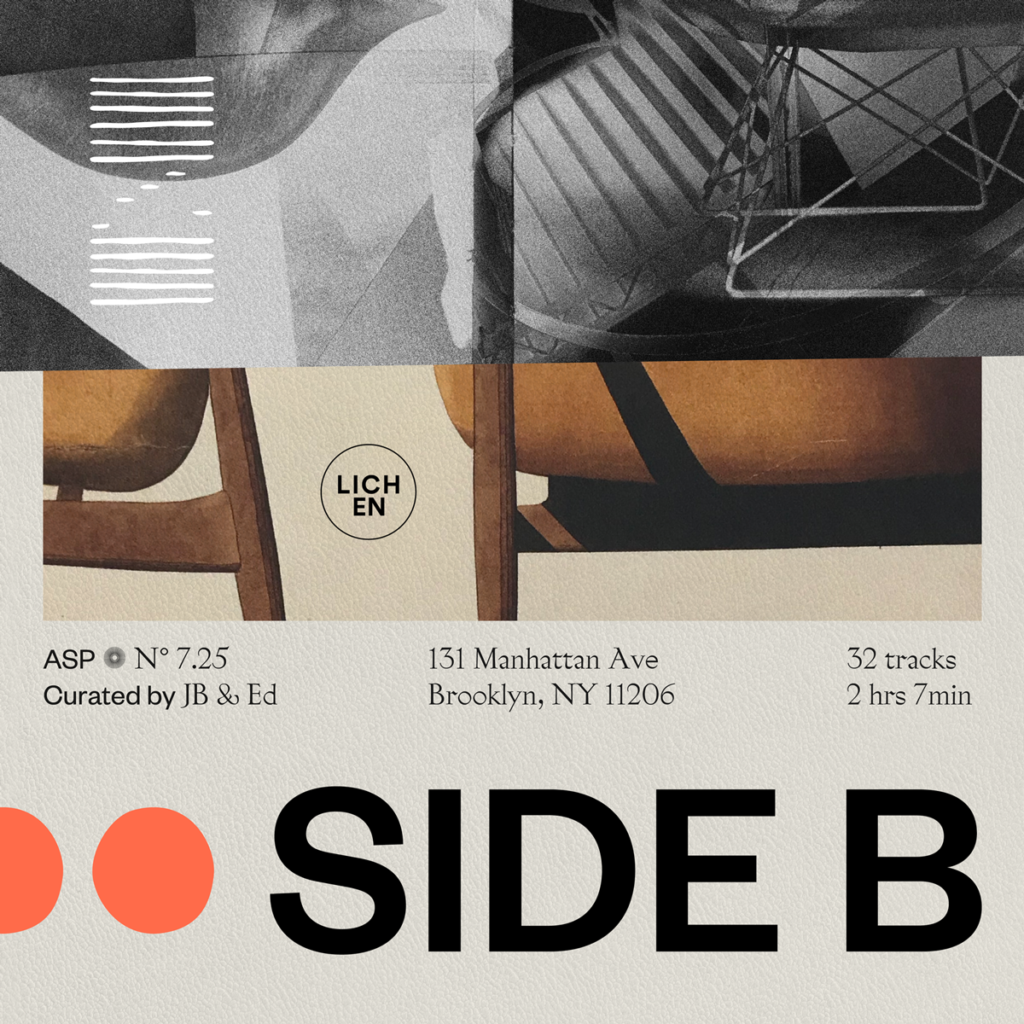